Now most of you might have heard about Thomas Telford who was famous for many fantastic Civil Engineering feats but you might not be aware of his connection to Norton Green and also the significant engineering work he undertook here in Brown Edge.

Telford was born in Westerkirk, Scotland on August 9, 1757. At the age of 14 he was apprenticed to a stonemason, and some of his earliest work can still be seen on the bridge across the river Esk in Langholm in the Scottish borders. He worked for a time in Edinburgh and in 1782 he moved to London where (after meeting architects Robert Adam and Sir William Chambers) he was involved in building additions to Somerset House. Two years later he found work at Portsmouth dockyard and – although still largely self-taught – was extending his talents to the specification, design and management of building projects

In 1787, through his wealthy patron William Pulteney, he became Surveyor of Public Works for Shropshire, England. At this time, ‘civil engineering’ was a discipline still in its infancy, so Telford was set on establishing himself as an architect. His projects included renovation of Shrewsbury’s Castle, the town’s prison (during planning of which he met leading prison reformer John Howard), a church (St Mary Magdalene) in Bridgnorth and another at Madeley Shropshire

As county surveyor, Telford was also responsible for bridges. In 1790 he designed a bridge carrying the London-Holyhead road over the Severn river at Montford, the first of some 40 bridges he built in Shropshire, including major crossings of the Severn at Buildwas, Bridgnorth and Bewdley. The Buildwas bridge was Telford’s first iron bridge (he was heavily influenced by the famous bridge at Ironbridge), but was 30 ft (10 m) wider in span and half the weight. As his engineering prowess grew, Telford was to return to this material again and again.
Telford’s reputation as a civil engineer meant he was constantly consulted on numerous other projects. These included water supply works for Liverpool, improvements to London’s docklands and the rebuilding of London Bridge (c.1800).
Telford devised a masterplan to improve communications in the Highlands of Scotland, a massive project that was to last some 20 years. It included the building of the Caledonian Canal along the Great Glen (and redesign of sections of the Crinan Canal), some 920 miles of new roads, over a thousand new bridges, numerous harbour improvements (including works at Aberdeen, Dundee, Peterhead and Banff, to name but four), and 32 new churches.
Telford was consulted in 1806 by the King of Sweden about the construction of a canal between Gothenburg and Stockholm. His plans were adopted and construction of the Göta canal began in 1810. Telford travelled to Sweden at that time to oversee some of the more important initial excavations.

The ‘Colossus of Roads’
During his later years, Telford was responsible for rebuilding sections of the London to Holyhead road (a task completed by his assistant of ten years, John MacNeill; today, the route is the A5 trunk road). Between London and Shrewsbury, most of the work amounted to improvements (including the Archway cutting in north London and improvements at Barnet and South Mimms). Beyond Shrewsbury, and especially beyond Llangollen, the work often involved building a highway from scratch. Notable features of this section of the route include the iron bridge across the River Conwy at Betws-y-Coed, the ascent from there to Capel Curig and then the descent from the pass of Nant Ffrancon towards Bangor.
On the island of Anglesey a new embankment across the Stanley Sands to Holyhead was constructed, but the crossing of the Menai Straits was the most formidable challenge, finally overcome by the Menai Suspension Bridge (1819-1826). The steel from this bridge being made at Foundry Square, Norton Green. Some scholars have questioned this but when I was a boy my uncle Gordon (the font of lots of history and information) told me that on the side of one of the pillars there is a plaque that states this to be true.
Telford also worked on the North Wales coast road between Chester and Bangor, including another major suspension bridge at Conwy, opened later the same year as its counterpart at Menai.
Late career

Other works by Telford include the St Katharine Docks (1824-1828) close to Tower Bridge in central London, the second Harecastle Tunnel on the Trent and Mersey Canal (1827), and the Birmingham and Liverpool Junction Canal (today part of the Shropshire Union Canal) – started in May 1826 but finished, after Telford’s death, in January 1835. At the time of its construction in 1829, Galton Bridge was the longest single span in the world.
This is where we have our Brown Edge connection with Telford as in 1823 he was commissioned to create a new reservoir at Knypersley to provide more water for the Trent and Mersey canal via the Caldon Canal 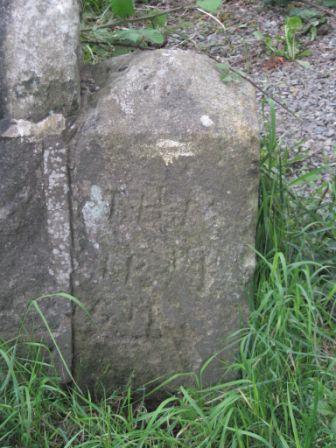 The surveying work was started from the stone pillar at the Greenway Bank end of the dam. The Benchmark point is still there and Telfords own hand would have touched the surface as he was undertaking the survey.

I have always been told that  Norton Green iron was chosen for the then largest bridge in the world. In fact Menai bridge records show that the contract to supply the chains went to Mr Hazeldene at Upper Magna Shropshire.  So why this continual rumour?  Telford obviously had links with the local families due to his time at Knypersley. The foundry at Norton Green was owned by the Cope family and the Heath family who owned another iron and steel foundry at Knypersley   I suspect that the main order was placed with Mr Hazeldene and he sub contracted it out to other suppliers one of which was Copes of Norton Green.