Rev Edwin John Sturdee was Vicar of this parish for only a few years at the turn of the 19th century.  It is now clear that he was a very learned and travelled man even spending time in Australia.

In undertaking some research  it became apparent that he was slightly disappointed in being given the living here at Brown Edge and as he had many learned friends at Oxford he would quite regularly speak there.  He appeared to be very supportive of women’s issues.  This feeling of Brown Edge being perhaps not the heights to which he  imagined himself of being capable, I think explains why he talks so positively of Brown Edge, overemphasising the capabilities of the parish. 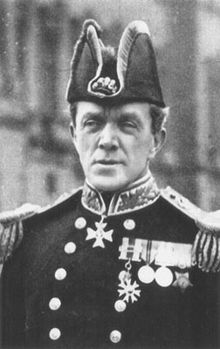 His Nephew however was indeed a hero of the nation.

On 8 December 1914, whilst coaling at Stanley, he was surprised by the squadron of Graf Maximilian von Spee and the Battle of the Falkland Islands ensued. Von Spee, finding that he was engaged with a superior force, was forced to flee. In the course of the pursuit Sturdee’s forces sank the entire German group, with the exception of the light cruiser Dresden, which was not hunted down until some months later. For this victory Sturdee was created baronet in January 1916. He later commanded the Fourth Battle Squadron at the Battle of Jutland, becoming admiral in 1917.

After the War he became Commander-in-Chief, The Nore, and was promoted to Admiral of the Fleet in 1921. He was appointed Knight Grand Cross of the Order of the Bath (GCB) in the 1921 New Year Honours, having already been appointed Knight Commander.

Sturdee retired to Camberley, in Surrey, and died there on 7 May 1925. He was buried in the churchyard of St. Peter’s Church in nearby Frimley. His gravestone incorporates a cross made from the timbers of Nelson’s ship, HMS Victory. His grandson William Staveley Sturdee was also an Admiral of the Fleet.