Pressures of work and due to me having to take over the editorship of the Parish News as well as starting to write a history of the Workingmens Club has meant that this site has taken a back seat for a while. Therefore it has not been updated for a while. However, I have decided to open it again because if the resources contained within. If you feel that you could contribute anything then please let me know.

END_OF_DOCUMENT_TOKEN_TO_BE_REPLACED

So are you in the Brown Edge Tree? I was once talking to Harvey Durber when he accosted someone walking past and said  “Ahdoo,  oo at,  at a strug?”  Once the unidentified person had worked out what he meant, she said  that she was a newcomer on to the village.  A sharp intake of breath from Harvey followed by  “Thee tad better watch ite who they speykst to up ayare the knowst. Dunner towk ill abite anywun. Thee tarow inbreds! Well my research has confirmed this!…

END_OF_DOCUMENT_TOKEN_TO_BE_REPLACED

Can you name anyone?

Click on the title above to see a large version with names of people already identified. 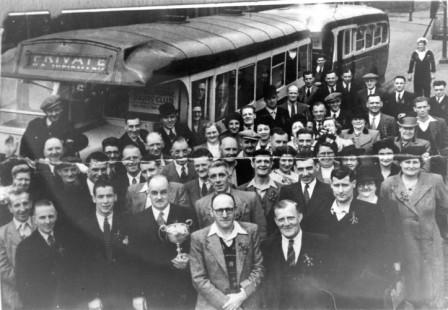 This is a photograph of the victorious Smallthorne and District Darts League who had competed in The People Darts League Championship Held at Rugby in the early 1950’s.

We all probably use them but local sayings contain a wealth of history. For example “She has more faces than Bucks clock”  You need to know that this relates to Bucks Jewlers (now closed) and that it had a clock on the ourside of the building with two faces.  I am told that inside the…

END_OF_DOCUMENT_TOKEN_TO_BE_REPLACED

Over the years I have collected many dialect words but others keep popping up from time to time.  Most of these words (around here) seem have Saxon meanings and are classed as Old English. If you can think of any words please take the time to record them by clicking on this article and adding…

END_OF_DOCUMENT_TOKEN_TO_BE_REPLACED

This year (2014) is obviously 100 years since the start of what some people call World War One (WW1) but is officially termed “The Great War”. It was called the Great War because  this type and scale of utter and total devastation had never been seen before and indeed not since. It changed the way we fought wars, lived our peace, and thought about each other. When the war started people said “It would all be over before Christmas” and joined up, as in previous wars, in groups…

END_OF_DOCUMENT_TOKEN_TO_BE_REPLACED

This is a closed site, only available to people with close links to the village